Disclaimer: The advice provided may not work with your lender.

Student loans are overwhelming.  The interest rates are frequently higher than a mortgage rate and the amount owed is sometimes equal to or more than a mortgage.  Rather than give up, here are some things you can do to help the balance decrease.

These are just some things that I’ve followed.  Feel free to chime in with other useful tips and tricks to reduce debt, especially student loans.

I’m about 3 weeks away from my next major soup round.  It sounds a bit weird since it’s so hot out, but now is the best time to stock up on produce to make some extra healthy soups so they’re ready for fall.  By doing some of the organizing ahead of time it makes the prep time that much easier.

If you’ve read any of my other prepping techniques you know that by now I have all of my recipes selected and I’m purchasing non perishables as they go on sale.  To prep for my next round of 13 soups I’ve found it’s easiest to create a plan for the week so I know what to make when.  It sounds a bit daunting so here is how I make a plan for week long cooking:

Shopping: The majority of what I need will be fresh produce, so I can’t buy this too far in advance.  I know I can get the best prices on fresh produce at our farmer’s market on Saturday mornings so I begin with that since the hours aren’t as flexible as the stores.  I know I should be able to get almost everything I need there and then just a few items at a grocery store.  I also know that I’ll need to run the items home and place in the refrigerator since it is so hot out before running to the grocery store for the rest of the list.  One of our grocery stores is closed on Sundays so Saturday makes the most sense for me to get all of my ingredients.  Previous experience is that I plan a solid 3-4 hours for getting supplies, hauling inside, and putting things away.

Prep:  I know I’ll need to make veggie broth and clean and prep my kitchen the day before.  Once the broth is going on the stove I can prep my kitchen for the week.  Usually I clean and sanitize everything and then get out measuring cups, prep bowls, etc. so they are ready to go.  I also organize all of my recipes in the order that I need to make them and group the dry ingredients with the recipe so I don’t have to hunt for the ingredient I need. This round also calls for a lot of chicken so I’ll stick that in the slow cooker so it’s ready to go the first morning of cooking.  If there’s time I’ll start prepping some of the veggies as well.

Order of Recipes: This is the part that everyone always asks me how I determine so I’ve included my steps below:

I use a notebook to write out which soup needs which pot before I begin.  I’ve also written down how many cups the recipe makes and if the recipe needs a particular type of storage container.  I use a sticky note on top of the recipes with the day and title of the recipe to use for putting things in order the day before I begin preparing.  If using recipes out of a cookbook I write the page number down as well.

The key to surviving any holiday planning is to start ahead.  Sure people may think you’re a bit odd, but the stress you will save yourself will be worth it.  I developed the habit of planning 2-3 months ahead of time long ago so I’m actually a bit behind where I usually am. I may have also begun planning my Christmas baking at the same time as planning on what I want to make for Thanksgiving…

It’s never to early to start planning, so here is a checklist of things to keep you on track so stress is less.

These are just a few tips and tricks. Remember that everyone has traditions around the holidays and these should also be incorporated into your plans. Staying organized is key to everyone enjoying the day.

One of the most frequently asked questions I receive is “Where do you find your recipes?”  Since I’m a librarian by trade I have no problem in sharing my resources with you.

There are definitely other resources out there, but these are the main ones that I use.  Happy cooking! 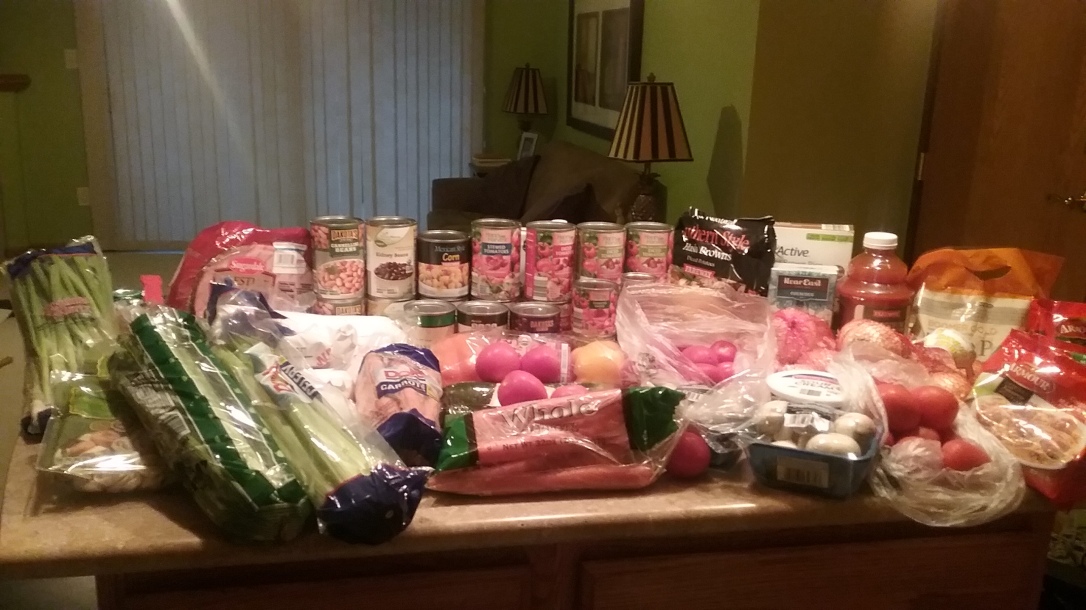 Last year I decided to try only soup as freezer meals.  After some mishaps, I determined that it turned out not to be a bad deal and last fall I loved coming home from work and having a wide variety of choices in the freezer full of summer veggies. This year I decided to do the same and learn from my mistakes last year.

My biggest struggle with making this much soup at once is choosing which recipes to use. Limiting myself to only 12 soup recipes is actually difficult!  After pulling six of my favorite recipes I tried my skills out on six new recipes this year and modified two of the ones I tried before.  I’m happy to report that again I have a freezer full of amazing soup.

I stayed under $120 for all 12 recipes and managed to get over 72 meals out of this round.  This time of year is amazing in Iowa for the local farmer’s markets and I ended up spending less on produce there than at the store. I also made my own broth and saved quite a bit of money doing that.  I did end up buying a new stock pot this year as the 6 quart size was just too small for a few of the recipes and I decided to make my own veggie broth this year and needed quite a few cups for the recipes.  Having the extra pot definitely came in handy and I got one with a ceramic liner so food didn’t stick and it was lightweight (weight becomes important when looking at 12 quart pots).

Again I spread out the process over a week since ingredients have to be added, simmered, etc. and there just isn’t enough time to do that in one day.  Not to mention that I only have so much room on the stove.  When I organize the soups I’m going to make I typically calculate which pot I’ll need to use and try to have one going in the slow cooker at the same time as one or two on the stove. 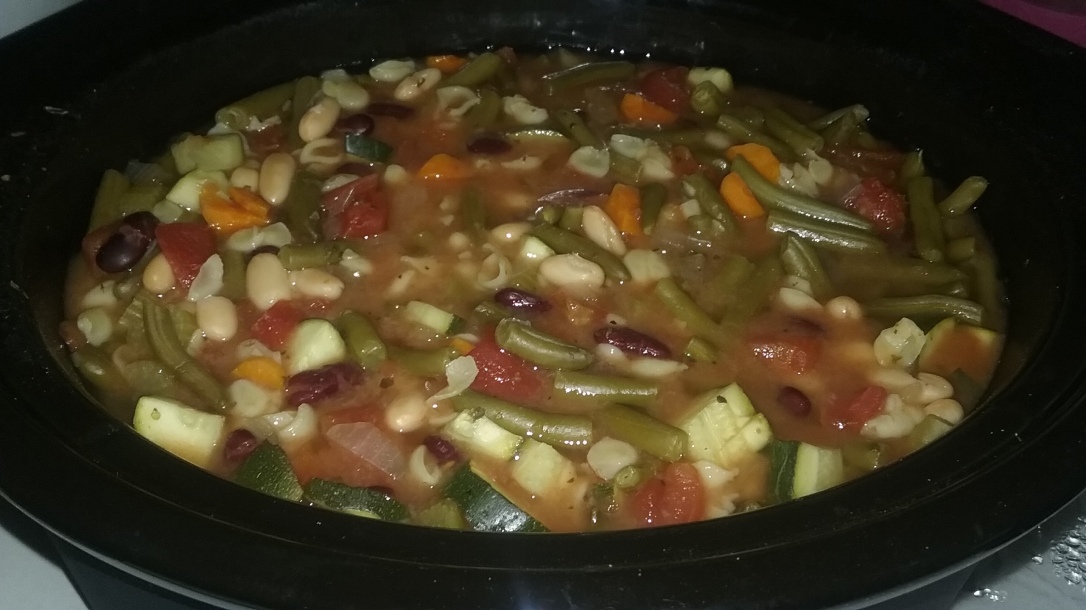 Here are the recipes that I made this year (you’ll note some are the same as last year):

South of the Border Corn Chowder

Meatball Veggie (I used a recipe out of a cookbook for this one, but this is close to the recipe I used)

Roasted Tomato-for this recipe I combined two recipes and made up my own.  Basically I roasted 5 pounds of tomatoes (seeded and quartered) and 2 red bell peppers (sliced) in the oven with olive oil and garlic.  Added those to some cooked, diced onions and boiling veggie broth and simmered until nice and mushy. Added in some basil then used an immersion blender to blend smooth and finished with adding a 1/2 cup of heavy whipping cream.

Again getting everything into the freezer took some work, but the end result was worth it! 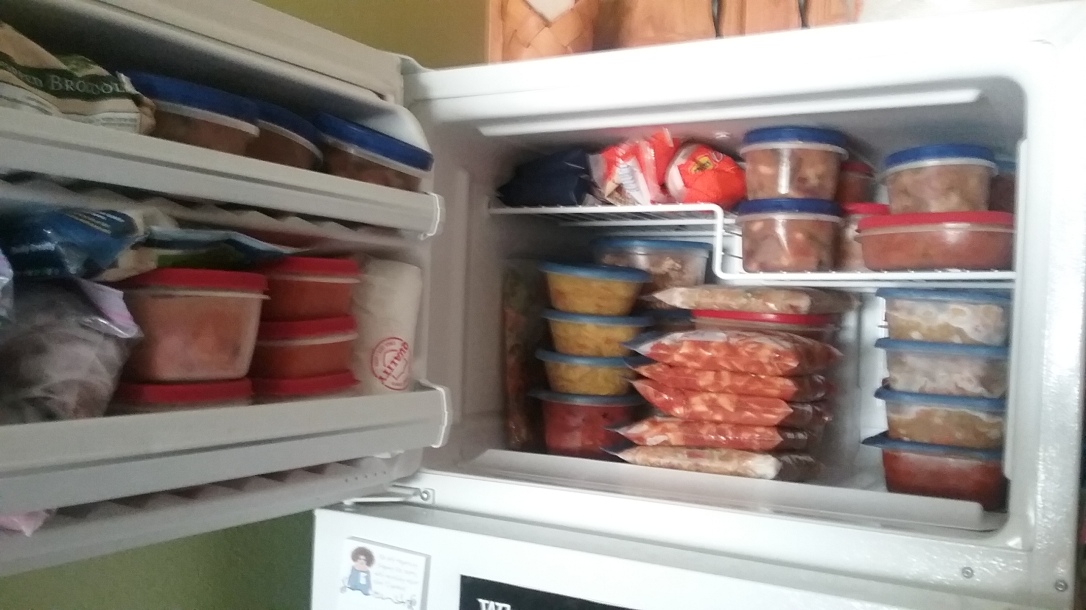 Just one of the freezers during the organizing process.